Want to lose weight…and keep it off as you age? A new study published in the New England Journal of Medicine suggests a link between yogurt and weight loss. The study, conducted by the Harvard School of Public Health, quizzed over 120,000 nurses and other health workers about their dietary habits over the course of many years. The goal was to discover what impact diet had on weight over time.

Consumption of two foods—nuts and yogurt—were most closely correlated with weight loss, according to Walter Willett, one of the study’s co-authors. Interviewed on National Public Radio, Willett noted that the active probiotic cultures in yogurt may be responsible for yogurt’s weight loss powers. “There has been a lot of work in recent years on how the types of bacteria in our colon influence our state of inflammation and weight gain. So it may well be that the healthy bacteria in the yogurt are helping change the mix of bacteria in the colon and influencing weight.”

Willett also noted that fat content in foods did not mean that the food itself was fattening. “But eating foods that keep us satisfied is really going to be important in the long run.”

That “satisfaction factor” is one reason Greek yogurt has been called a “superfood” when it comes to losing weight, says Mertz. “Greek yogurt is a great weight loss food because of its high calcium and protein levels,” she says “Studies show that protein takes longer to digest, and is more satisfying, than ‘empty’ carbohydrates. You feel full longer after you’ve enjoyed a serving of Greek yogurt. And that may keep you from snacking on other, higher-calorie foods.” 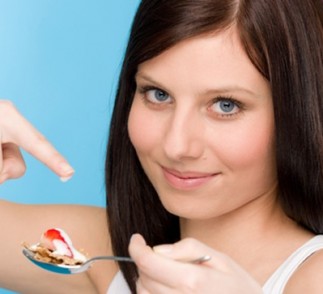