There’s a kid in all of us and it’s no secret that both adults and children love pudding cups. They’re convenient, a common snack, and a perfect addition to packed lunches for millions of kids. It’s also no secret that rates of obesity and Type 2 diabetes are skyrocketing among American children, prompting many parents to seek healthier alternatives to sugary snacks such as pudding cups.

“Incidence rates of Type 2 diabetes among young people have increased significantly over the past 5 years1,” says Lara Field, a Chicago-based pediatric dietitian. “In fact, according to research published last year at John’s Hopkins University School of Medicine, Type 2 diabetes now accounts for about 45% of new cases of diabetes in the pediatric population,” says Field.

“Adding VOSKOS® Greek Yogurt to recipes can help adults and children alike sneak extra protein and calcium into their kids’ diets, while sneaking out some excess sugar,” says Field. “And unlike many pudding cups and yogurt found in the dairy section, VOSKOS® Greek Yogurt contains no artificial colorings, binders, fillers, hydrogenated oils or thickeners,” adds Field.

“Another bonus with VOSKOS® Greek Yogurt is its higher protein content, which helps you feel full, longer,” says Field. “Protein takes longer to digest than carbohydrates, and protein doesn’t cause insulin spikes like sugary snacks.”

VOSKOS® Plain Non-Fat Greek Yogurt contains 24 grams of protein, and just 9 grams of carbohydrates per serving. “It’s much higher in protein and lower in carbohydrates than the typical pudding cups. And this recipe for Cherry Chocolate ‘Pudding’ Cups makes it just as delicious for lunch,” says Field.

Creating a creamy pudding style dessert with VOSKOS® Greek Yogurt instead of milk is easy because “Greek Yogurt is naturally thick and creamy, with a texture very similar to pudding,” says Field. “What’s more, a recent study showed that a high-protein breakfast, such as yogurt helps reduce post-breakfast blood sugar elevation in the Type 2 diabetics studied by up to 40%. Thus, if your child has diabetes, it is an excellent choice to maintain blood sugar control.”

Torani is a registered trademark of R.Torre & Company. 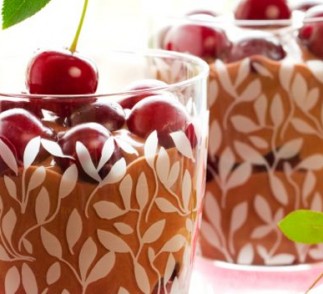